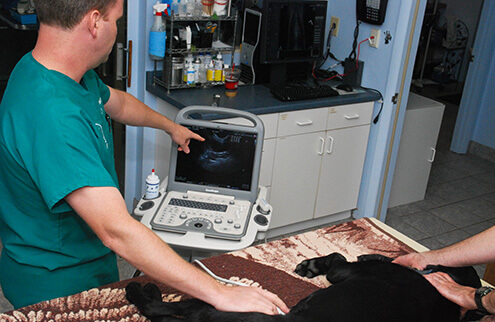 Duxbury Animal Hospital views your dogs and cats as members of your family, recognizing the indelible bond that exists between you and your animal companions. We provide advanced pet care that meets or exceeds the standards of quality put forth by the veterinary profession.

For healthy pets, we focus strongly on wellness care and preventive medicine for happy, disease-free lives, from puppies and kittens to senior pets. When pets are sick and more involved care is required, our team provides veterinary services with the highest level of compassion and empathy. Our advanced veterinary services include the latest in surgical and therapeutic techniques for a safer, more comfortable patient experience.

At Duxbury Animal Hospital,
we offer more because you and your pets deserve more.

A History of Family Pet Care

Duxbury Animal Hospital was established in 1967 by Ben Dow, DVM. This first hospital was simply a small basement office in his home. Dr. Dow spent the next 10 years providing care to the family pets of Duxbury, as well as the horses and livestock of the surrounding communities.

In 1977, with Dr. Dow’s relocation back to the Midwest, Dr. Bruce Berridge purchased the practice. He began a 36-year career as a Duxbury fixture, known for his compassionate care and strong community support.

The hospital saw many expansions and improvements, as veterinary medicine progressed beyond the bucolic “country doc” image through the latter half of the 20th century. During this time, the hospital’s focus was on preventive and urgent care. If more sophisticated diagnostics were required, owners had to drive several towns away to larger referral hospitals. 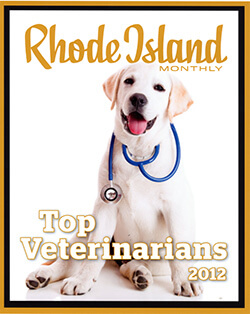 Dr. Hebert brings 12 years of advanced training and experience in veterinary medicine to the practice. He is a respected lecturer in allergy and microbial treatments and parasitology, with a focus on heartworm prevention. The protocol he developed for Lyme prevention has become the standard for vaccination protocols in Lyme endemic areas.

In response to the need for more comprehensive services under one roof, he invested in new technologies and equipment: digital imaging, ultrasound, laser surgery, cryosurgery, laser therapy, and more.

Managing a veterinary clinic is not a new experience for Dr. Hebert. Since 2005, he had been the Chief of Staff at West Shore Animal Clinic in Warwick, Rhode Island, where he also created an advanced veterinary facility while continuing to focus on client and patient care. This was evident from his many community recognition awards, including being named one of Rhode Island Monthly magazine’s Top Vets for 2012 and 2013.

Today, Duxbury Animal Hospital provides your pets with the advanced medicine they deserve, while maintaining Dr. Berridge’s tradition of family-focused care. Take a virtual tour of our hospital and see how we’ve grown!

We feel privileged to belong to an elite group of animal hospitals that are accredited by the American Animal Hospital Association. Only 15% of all animal hospitals in the United States are recognized and endorsed by the AAHA, and voluntarily meet or exceed exceptional standards for facilities, equipment, and procedures. Member practices are regularly evaluated by AAHA Practice Consultants to ensure they meet the highest measure of veterinary excellence that you and your pet deserve.

While not a true native Cape Codder, Dr. Hebert spent most of his youth growing up in Dennisport where his parents started their own candy business, Stage Stop Candy, more than 30 years ago. His father, Ray, is a third-generation candy maker from the Hebert Candies family, a New England staple since 1917 and the first makers of white chocolate in America.

Dr. Dan earned his bachelor’s degree in biotechnology at Worcester Polytechnic Institute, known for its work in veterinary biomechanics. Prior to veterinary school, he performed research in AIDS-related diseases at Harvard Medical School. This included several months in Costa Rica studying dental infections in squirrel monkeys. He then received his doctorate from Tufts University’s Cummings School of Veterinary Medicine, where he is still active as president of the Alumni Board. While general practice remained his goal, he still elected to complete a one-year internship in advanced small animal medicine and surgery at Veterinary Specialists of Connecticut in 2002. During that time, he received additional training in a large number of advanced surgeries and diagnostics, which he put to use at a large emergency and referral clinic outside of Providence, Rhode Island, before taking over as Chief of Staff at a private hospital in 2005.

During the past several years, Dr. Dan has continued to expand his skills in advanced veterinary medicine. This includes ultrasound, digital imaging, dental surgery, laser surgery, endoscopy, critical care, and echocardiography. As many of you may have noticed, we have already begun to upgrade the technology at the practice to allow our patients to receive this innovative care here instead of having to be sent several towns away.

While he will miss his Rhode Island friends and clients, he truly sees this move to Duxbury as “coming home.” His parents are still on the Cape and his sister has lived with her family in Plymouth for more than 10 years. While he does not yet have a family of his own, he is very excited to be able to watch his niece and nephew playing sports and then relax in one of the many local restaurants he has already come to love. A self-proclaimed history nerd, he loves the idea of walking the same ground as the Pilgrims and revisiting the many historic sites from his youth.

He is very involved in animal disaster relief including board positions with the Rhode Island Animal Disaster Response Team and the Rhode Island Veterinary Medical Association. He also works in the Prison Pups program with NEADS, a group that trains puppies at local correctional facilities to become service dogs for disabled Americans, including veterans. He plans to continue this work here in Duxbury.

For fun, his activities reflect that of a true New Englander: skiing, hiking, golfing, tennis, kayaking, boating, swimming, scuba diving, fishing, and cycling. He also has a severe travel bug and has visited places around the globe. His favorites include Alaska, the Azores, and Ecuador, including the Amazon and the Galapagos.

For furry friends, he has a cat and a black Lab. Macy, an 11-year-old calico was rescued from severe abuse and required multiple surgeries during his internship to walk again. According to Dr. Dan, she still loves people and rarely stops purring. She likes to help him relax by lying across his computer while he is trying to work. His dog, Joe, was retired early from the Prison Pups program due to a short attention span. He enjoys swimming, walking in the town forest, and sleeping.

Dr. Beth Buchholz got her first horse when she was in junior high school, and she’s been a “horse person” ever since. By the time she reached high school, her dream was to become a veterinarian.

During her first semester at the University of Massachusetts-Amherst, Dr. Buchholz spent much of her time riding and working with horses. She then moved to Coral Gables, Florida, to gain valuable experience training Arabian horses on Frank Smathers’ Arabian horse farm. After a year, Dr. Buchholtz was ready to go back to school for her undergraduate degree and then to veterinary school, as she initially planned.

Dr. Buchholz got her bachelor of science degree in biology from the University of Miami in 1977, and stayed for a couple more years earning credit hours toward a master’s degree in animal science. While in south Florida, she worked part time for a number of veterinarians, and one summer worked on a cattle ranch to increase the scope of her skills.

In 1984, Dr. Buchholz received her Doctorate of Veterinary Medicine from the University of Florida College of Veterinary Medicine. She married her fiancé and fellow ’Gator, Mark Buchholz (class of 1984, applied mathematics), and they moved to the Boston area. For Dr. Buchholz (born in Boston and raised in Duxbury), this was a homecoming, as her parents lived on the south shore of Massachusetts. After working at various animal clinics in the Milton area for more than a decade, Dr. Buchholz became part of the veterinarian team at the Duxbury Animal Hospital in 1996.

Dr. Buchholz’s practice of preventive medicine and teaching of preventive care incorporate her deep affection for animals and her positive experiences of animal–human bonds. She enjoys helping her clients create nurturing, life-long relationships with their pets.

Combining her interest in animal–human relationships with her love of horses, Dr. Buchholz has begun a new venture: an equine assisted therapy program to help children with behavioral challenges. In 2006, she earned her certification from EAGALA, the Equine Assisted Growth and Learning Association (a non-profit organization in which horses are used in the treatment of mental health). As the equine person who supplies the horses, Dr. Buchholz works in conjunction with therapists to develop relevant and beneficial activities that support therapeutic interactions.

Dr. Buchholz and her husband, Mark, live in Pembroke, Massachusetts. They have three children: Catherine, Jonathan, and Steven; they also have six animals, one dog, two cats, a dwarf hamster, and . . . two horses (one of her main hobbies). Both she and Mark enjoy pastoral counseling for their local church.

What are some of the benefits that Dr. Buchholz enjoys at DAH? “I love the relationships we’ve developed with the pets, the owners, the families . . . it’s more than just treating an animal or diagnosing disease, it’s the whole picture.”

Dr. Shepard had the privilege of growing up in the beautiful green mountains of Vermont. She spent her childhood hiking and biking through the mountains, and fishing and boating at her family camp on Peacham Pond in the northern part of that state.

Her exposure to the wild outdoors and curiosity about animal biology led her to pursue a bachelor’s degree in Animal Science at the University of Vermont. While at UVM she applied and was selected for the Cooperative Real Education in Agricultural Management (CREAM) program which allows students to manage and participate in running a fully operational dairy herd. It was at UVM while milking cows at sunrise that she decided she loved animals and medicine, and would become a veterinarian.

Dr. Shepard attended the University of Minnesota College of Veterinary Medicine in 2007 and completed her Doctorate of Veterinary Medicine in 2011. She also completed a small animal rotating internship at New England Animal Medical Center in 2012. The level of her excellence in care was such that she invited to remain there as a doctor in their advanced General Medicine division. During that time she received addition training and experience in many areas, particularly dental surgery, critical care, advanced internal medicine, and laser surgery. She will be a fantastic addition to Duxbury Animal Hospital and the cutting edge technology that has been added there over the last two years.

Dr. Shepard and her husband bought a home in Duxbury in 2013 knowing that this was a town where they wanted to raise their new family. She is thrilled to have many years ahead practicing medicine and caring for the animals in this progressive community that she has quickly grown to love. She actively participates in the Duxbury Newcomers Club, and is also an involved room parent at her daughters’ school. For fun, she loves taking her daughters to Duxbury Beach in the summer, and skating on the ponds in the winter time. She and her husband enjoy playing tennis, dinners on the beach, and walking on the Duxbury bogs during the cranberry harvest. She has a black Lab aptly named Maverick who, despite his age, is always up to new tricks!